I confess that I live happily in the 1e and 2e past. I never played 3e or 4e but kept an interest in what was going on from afar.

Here at THACO DRAGON we've provided a hybrid rules set that takes material from both 1e and 2e AD&D. The aim was to keep 1e concepts or traits but written to the 2e system.

Some may disagree, but I really like the old THAC0 system and the general character of the AD&D rules (based on certain limits and the perspective of a 0-level human). I like the fact you have to roll different die to succeed at different tasks, and not just d20s - where sometimes you need to roll high and sometimes low. The differences give a sense of unique action.

Another thing about AD&D is that the inherent restrictions and specific roles of each character class encouraged co-operative game play. Character class abilities were not balanced, and thoughtful resource management was the key. Ideally people played to fulfil roles and it was accepted that at low levels the player characters were extremely vulnerable (some more than others). In this environment there were consequences to having a lack of caution or a lack of imagination - there was real danger to adventuring!

Yes, AD&D is the game system I grew up with. And although somewhat complicated, as most Role Playing Games tend to be, there was/is the simplicity of the red BASIC RULES box set (with the later blue box, green box rules etc.) offering a technically less elaborate method to play the game. These BASIC rules are a perfect introduction to the expanded rules AD&D system.

If I was going to teach younger people to play AD&D the BASIC RULES is the system I would pick. From there I would move onto the AD&D system for more complexity.

For me the core of D&D or AD&D are those BASIC boxed set rules. 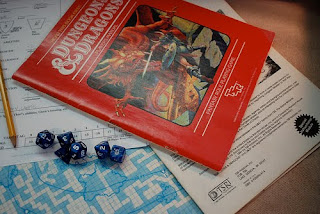 [Above: The Basic D&D Rules from the Red Box set.]

In reaction to the newer 'editions' of the game I put together a few rule modifications on these pages to make both the AD&D and BASIC game more survivable at lower levels - and also a bit more adaptable as you progress.

Some of the things I put into this AD&D version are 3rd or 4th Edition concepts, some are things from my own experience, and some are crossover rules to and from the D&D BASIC RULES SET.

Regardless of these alterations, the key to running great adventures is to have some level of flexibility in interpreting and implementing ANY rules. Go with what works to achieve your objective - in our experience, the aim was to run a survivable attention-getting story or series of encounters. The Version 2.6 modifications help in that endeavour whilst keeping to the spirit of the official AD&D/D&D rules.

To me I always saw AD&D/D&D as a rules system rather than just a fantasy setting. If 'they' want to have completely different rules they should go and call it Sword and Sorcery or GURPS or something.

All the Best from THACO DRAGON !

If Wizards of the Coast could just licence and/or modify the old THACO game system, and leave it in the hands of those that like it, they could have a nice ‘side business’ - and they could still roll along with a million new different versions of the ‘D&D’ game such as 4e and 5e. With the Internet this is already happening – people are posting free supplemental material at Dragonsfoot for AD&D.

If WotC could just reprint the old books they could sell them online and cash in on the hold out subculture market. It would not take much to edit the BASIC RULES D&D books, or the AD&D 2nd Edition material, to get them up to the THACO DRAGON standard. For example: I would eliminate the alignment languages from the BASIC RULES D&D books and make the centre section statistical summaries easier to follow. Plus I don’t think Female dwarves should have short beards either – female players might not like that idea ! A little bit of editing here and there would be welcome, whilst retaining all art, presentation style, and basic composition seen in the original publications.