*Set Up and Play D&D in One Hour: The Advantage of the Old BASIC RULES Game


If you want to teach and then run a Dungeons and Dragons game with a group of new players it is hard to go past the old BASIC RULES game: 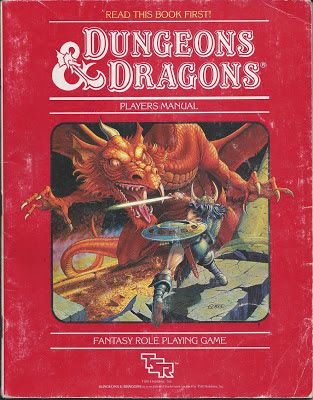 The key aspect about these simple rules is that it teaches players the game very quickly without overloading them with too much non-core information. The BASIC RULES utilises the same THACO system as the AD&D game so progression to more detailed rules can easily follow.

What is necessary, in order to have a game up and running within one hour, or perhaps two at most, is a Dungeon Master who understands the system ready with a simple adventure. Understanding the rules for new players should be no problem - and experience has shown it hasn't.

Even without reading thoroughly through the rule book, a new player can easily be shown the various classes of characters - Fighter, Cleric, Thief, Magic-User, Elf, Dwarf, Halfling - and have the core mechanics explained.

The key information relevant to running a game includes - ability scores, hit points, Armour Class (AC), weapons and their damage, and any spells if relevant. The THACO system does not even have to be explained at 1st level - only the idea of an Armour Class and rolling d20s in order to hit the AC is needed. There is a chart that can be utilised, TARGET AC vs HIT ROLL NEEDED, appearing on the Character Record Sheet on the back of the BASIC RULES Player's Manual (reproduced below): 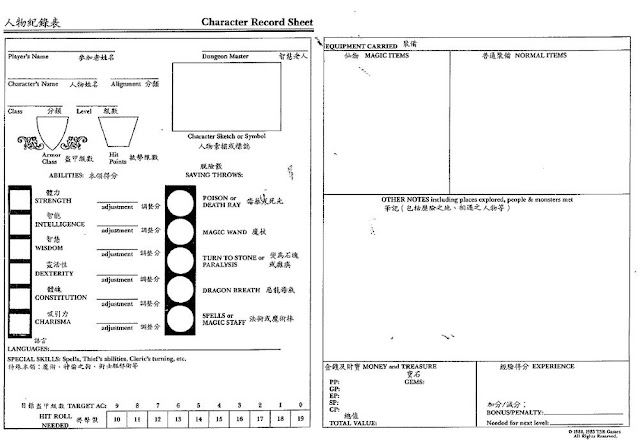 [This is a Chinese edition character record sheet taken from the back of the BASIC RULES Player's Manual.]

Using the chart we can see that the worst Armour Class is AC9, which is no Armour, and requires a roll of 10 or more on a d20. Hitting a leather protected opponent, which is AC7, is more difficult and requires a 12 or better on a d20. New players can easily work out the rolls needed for other Armour types and appreciate how improved protection makes it harder to hit opponents: AC7 is Leather, AC6 is Scalemail, AC5 is Chainmail, AC4 is Banded Armour, AC3 is Platemail and a Shield improves the AC by -1 (the lower the AC the better, because a higher dice roll is needed to hit).

The following points include basic information and 'house rules' modifications to the BASIC RULES game that we recommend for DMs:

First and foremost the Dungeon Master will need second hand or downloaded copies of the BASIC RULES game books that include the Player's Manual and the Dungeon Master's Guide (in the Red Box Set). Also needed to continue play beyond 3rd level are the EXPERT RULES, the COMPANION RULES, the MASTERS RULES, the IMMORTAL RULES and/or the RULES CYCLOPEDIA that combines all this information. The most essential item, to allow easy starting play, is the BASIC RULES Player's Manual which has a blank character sheet on the back cover which will need to be photocopied. 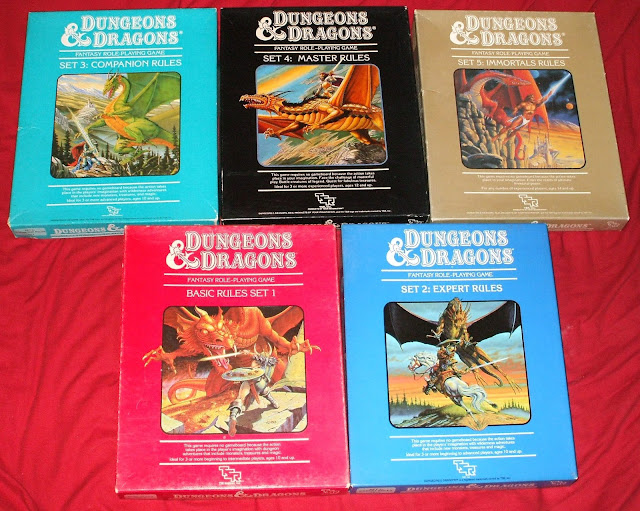 Most gaming campaigns will not need the higher level MASTERS RULES or IMMORTAL RULES but some material out of the MASTERS RULES might be useful to consider at lower levels like weapon mastery skills.

In terms of ready-to-go Adventures, the first two boxed sets come with their own material that the designated Dungeon Master will be able to use in order to run a game. Other out-of-print adventures can be found online for those DMs who would like to continue using published material. There are two options - downloadable material (which may come at a cost), and out-of-print books that can be found on Amazon or eBay. This link to a D&D game seller gives a good idea about what to search for. (Note: Isle of Dread originally came with the Blue Boxed Set).

*DMs will require the BASIC RULES books and photocopies of the blank Character Record Sheet provided on the back of the Player's Manual. See here for details.

*Full hit points for PCs at 1st level for all classes (+ bonus hit points, mandatory high Constitution scores, and/or 1d8 hp for each character as per the suggestions outlined on the THACO DRAGON home page).

*Weapon Mastery rules are open to all classes and become available after 1st level. A limit on the maximum ability to Expert level is recommended (whereafter melee damage bonuses become excessive). Skilled weapon use gives a +2 to hit, while Experts have a +4 bonus to hit opponents. While the cost to learn each skill level requires only one 'proficiency slot' characters cannot become Experts with a weapon until reaching 9th level. Weapon Mastery is an uncommon skill.

*Poison does damage rather than death. The amount of damage is left up to the DM depending on the creature.

*Death results when characters are reduced to -10 hp. From 0 to -9 hp the PC has fallen unconscious and loses 1 hp per round unless a saving throw vs death is made to indicate they have stabilised.

*Elves are normally only Fighter/Magic-Users but can now also be of any class. The DM may wish all Elves to be magic-using beings so that they have to be either a multi-classed combination or single classed Magic-Users or Clerics.

*Elves are now 90% resistant to Sleep and Charm (taken from AD&D rules), along with their immunity to ghoul paralysis.

*Dwarves and Halflings who are normally only Fighters can also be either Thief or Cleric Classes.

*Dwarves must have minimum scores of 9 in Constitution as well as Strength.

*Thieves gain a 5% bonus to their skill checks, except Hear Noise and Read Languages, for every +1 bonus they get due to a high Dexterity score.

*Thieves Backstab multiplier improves to x3 at 10th level. In BASIC, strength and other bonuses are included before this multiplier is used. In AD&D the multiplier only applies to the dice roll. Note: The DM may wish to use the AD&D system.

*Punching damage is 1d2 plus any strength bonus.

*Equipment: Metal Armour costs double the amount listed in the Player's handbook except for Plate Mail which now costs 200gp. Note that the initial amount of Gold Pieces allocated to each character is 3d6x10. This modification now makes heavier Armour much more difficult, or impossible, to acquire at first level.
_________________________________________

If Wizards of the Coast could just licence and/or modify the old THACO game system, and leave it in the hands of those that like it, they could have a nice ‘side business’ - and they could still roll along with a million new different versions of the ‘D&D’ game such as 4e and 5e. With the Internet this is already happening – people are posting free supplemental material at Dragonsfoot for AD&D.

If WotC could just reprint the old books they could sell them online and cash in on the hold out subculture market. It would not take much to edit the BASIC RULES D&D books, or the AD&D 2nd Edition material, to get them up to the THACO DRAGON standard.  Note: I would eliminate the alignment languages from the BASIC RULES D&D books and make the centre section statistical summaries easier to follow. Plus I don’t think Female dwarves should have short beards either – female players might not like that idea ! A little bit of editing here and there would be welcome, whilst retaining all art, presentation style, and basic composition seen in the original publications.

This blank Character Sheet is a reproduction of what is found on the back of the Player's Manual. This is not a photocopied print but one that has been constructed to the same specification, minus the hit roll numbers which can easily be filled in. 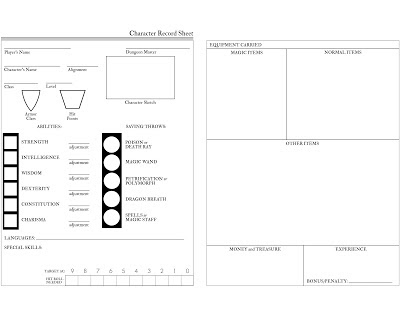