The following edited material is taken from the archived Frostbrand's Homepage at the "Heroes and Legends" link. The rules applied to these characters adhere to the standard AD&D rules, not modified to THACO DRAGON's standard.  The Player Characters are shown when they were at 10th Level on campaign in a Mystara-based world at some time during the 1990s.

This is the Hall of Legends, a Hall dedicated to the men and women paragons of good heart and strong swordarms. Aye, in these corridors you will find Paragons of such skill and courage that they took on the forces of Evil and said "Done that! Did that! Doin' it tomorrow..". Yes! mighty indeed are the men and women you shall find in this Hall. Great are their valour. Pure are their spirit. Mighty indeed are thier sword arms and spells. Introducing, the Greatest Heroes, Heroines and Legends to ever lived! ...well..close enough anyway...here are the good guys and gals of our campaign: 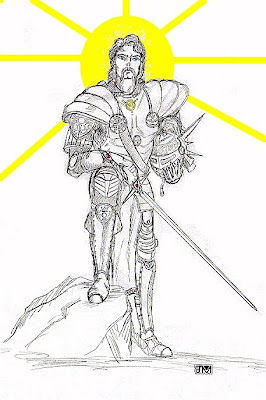 Miscellanous Notes:
Although kind and compassionate and upholding of the Order of Knight of Paladine, this paladin, beside being nicknamed "Yah! Mule" for his strength, is also labelled as "The Perverted Paladin". He is soooo crude (well...his player plays him so!) and vulgar that he walks the thin line between the protector of light, the chivalrous knight in bright armour to the wolf whistling, perverted, women harrassing err...person...yeah...that's it..

Miscellanous Notes:
Bellophron has all the special abilities and restrictions imposed to him as a Priest of War of the appropriate level. For more descriptions of a Priest of War, the Complete Priest Handbook should be consulted. In addition he has the benefits and restrictions of a ranger of appropriate level. When wearing no armour or non-metal armour, Bellophron can employ his Hide in Shadows ability at 56% and his Move Silently ability at 70%. This can only be done in natural surroundings.

Due to his tragic first encounter with some raiding Orcs, Bellophron has a -4 reaction to any Orcs and gains a +4 bonus when battling Orcs. Due to his very intense hatred, Bellophron would have to check his Wisdom at a -4 penalty everytime he is faced to face with an Orc. Usually, the ranger just kills any Orcs he encounters, regardless. Sometimes this makes him walk a thin line between his ranger status.

Bellophron also has two special friends that he sometimes takes along on his adventures with his wife and friends. Taranis is a faithful war dog that has been bonded to Bellophron since a puppy. He is quite intelligent and understands many basic and not too complex commands. The other is a faithful steed named Swift. Swift is a light warhorse that was presented as a gift to Bellophron when he was a Priest of Stormbardin, the God of Just Warfare. The horse is high spirited and will only accept Bellophron as his rider. Swift is highly trained and can rear on command and comes when whistled.

Miscellanous Notes:
"Hey! hold on...isn't there another drow made famous in FR with the similar nature??" I hear you ask. Forget him! . That is in another world. This is D&DLand!. Surely, nature and fates are sometimes so cruel as to have duplications in their domain. Have you ever wondered that in another dimension there is a person looking and having the same abilities as you???..hmmm?? 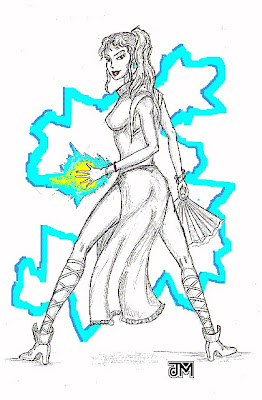 Treasures: Unspecified. However, Talia has on her, 10 platinum rings worth 20,000 gp altogether.

Special Abilities: All special abilities and hinderances of the Wu-Jen kit (refer The Complete Wizard's Handbook) and as a specialist in the School of Conjuration.

Miscellanous Notes:
As a Wu-Jen, Talia must observe certain taboos and rituals or lose her ability to channel the mystical energies afforded by the teachings of the Wu-Jen. As such, she is unable to drink any alcohol and cannot have sex on Wednesdays. 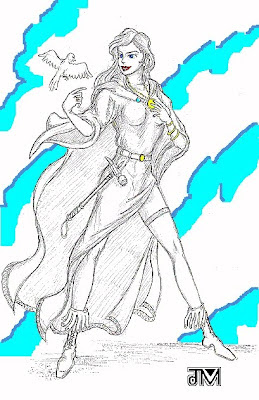 Miscellanous Notes:
When the Companions found her in the chapel of the undead infested Sparhawk Keep, unconscious, they found a cresent moon and harp pin on her person. After being revived and healed, Bella has neglected to allay the Companions suspicions that she is a Harper. In reality, however, Bella is only a Harper contact agent. That is she sympathises with the cause but is not actively involved. She took the mission to Sparhawk keep because she was the nearest agent there at the moment, as well as being asked by the Knights Council of Karameikos. 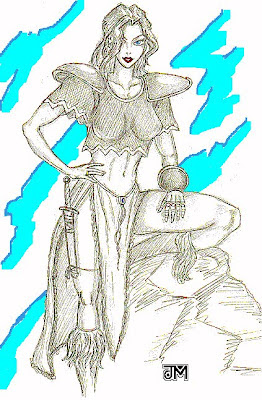 Miscellanous Notes:
In the Great Market of Westgate, the companions came upon a newly arrived slave train. Among the captives was a striking blond amazonian warrioress. Helping her to gain her freedom, the companions soon became friends with this warrior woman know by the name of Tyris Starwing. As the companions took on the evil forces trying to open a gate to the Abyss, Tyris became a valuable ally and companion.

Physical Description:
Tyris stands about 5 feet 9 inches, lithe and pround...and very "curvey" . She has shoulder length blond hair. Strangely, her hair has some sort of reddish, auburny, bronzy tint to it. In certain lights, its shines metallically, and Tyris thus englowed, looks like the beautiful celestial devas themselves. There is some sort of ancient beauty about Tyris, as a beauty of an age before man awoke on the earth. As Talia is the beauty of a beautiful spring day, and as Bella is the beauty of her elven soul and her human blood, Tyris' beauty is that of a time when the sun's first ray touched a pearl....(hmmm, do you understand that!??) On warring missions, Tyris puts on face paint, and bright feathers that is custom of her amazonian clan.

Personality Description:
Although a very skilled warrior, Tyris exhibits a very naive and innocent approach to city life in Westgate...in fact she is very naive and innocent in all approaches. The customs taken for granted by the citizens of Westgate and the companions themselves seem to be strange and fascinating to her. Her speech is never sly, and all her motives are crystal clear and transparent, thus its easy for the companions to recognise that her soul is as clean and pure as that of any paladin's.

Brief History:
Tyris' history is shrouded in mystery. Nobody knows where she came from, nor does anyone know there existed an amazonian civilization near the borders of Irendi. Nonetheless, Tyris herself has never volunteered any information on her past, her homeland, nor her objectives.
Until now.... 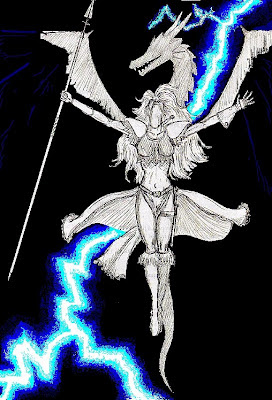 Physical Description:
Vavisthelle is an adult bronze dragon. Her scales are unusually shiny, and the effects of her flying in the sky in moonlight or sunlight has a sparkling effect as a light glints off her scales. As thus, her peers has friendly given her a mortal name of "Starwing".

She is strong of heart and courageous. Her morals are strong and righteous. But as she assumed mortal shape, she discovered a thing a bit alien to her true form. Love. Love of Taragin Rommell, the high elven warrior who is part of the Companions. But, life in the Dragon Isles are very different to life in the world outside, and as she travelled its land, she began to love the good hearted creatures in it....and to detest the black hearted creatures that blight the world.

Brief History:
Born and raised in the Dragon Isles, Vavisthelle was an exceptional student to the arts of war. Thought strategy and martial training at an early age by the Elders, she has proven to them that she possessed the skill of arms and the purity of heart to undertake a mission to the outside world. Ever since El-Dor, the lieutanant of Paladine has failed to return from his mission into the Astral plane, the forces of Good has been sending out covert operatives to discover what happened to El-Dor. Thus, Vavisthelle assumed her mortal form, an amazon warrior named Tyris Starwing and went out to the world. Although trained in human behaviour, Vavisthelle still remains naive to the passion exhibited by mortals in their undertaking. One emotion she discovered to her happiness and trepidation that she could not have coped with...yet she has heard stories of such occurances amongst her kind...Love.

Such in her travels, she met with the Companions and becomes a valuable ally to them against their fight against the Evil that is covertly building a strangle hold on the world.